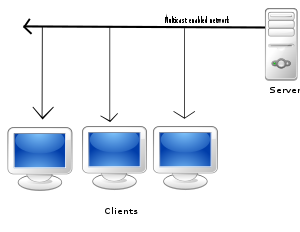 Preparation is something I had to learn. While I have always planned, true preparation has always eluded me. I mean to say that the ability some people have for seeing the way things will work out before they do has never been my gift. I have to play my way through everything and push the boundaries in order to get at what is possible. I have to see which questions get asked and which conversations are essential before it all makes sense.

That is why when streaming three concurrent sessions at a conference with two video feeds and one audio feed each, I new that everything would eventually work out. I knew that there would be a plan b that I could put in place. I just didn’t know what that plan b was until I saw it.

Originally we were going to use rented powerful laptops, but we didn’t have the right converters for our video feed. Then we were going to use our Boinx TV mixer to give the pictures nice overlays, but our own laptops weren’t capable of handling all of the multimedia. We were going to have the audio pumped directly to the mixer but the Ustream broadcaster wasn’t having any of it. Ultimately, we had a great stream being pumped out with both the powerpoints and the live video. This is super nerdy and all, but I think that the plan b we came up with was exactly what we wanted in the first place, but it took us a few revisions to get there.

It was the process of finding the plan b that was actually most engaging to me. Knowing that things would work the first time is not interesting to me. It is only through troubleshooting and creating a new solution that I feel valuable. It is about the workaround and the new workflow that everything comes together and I truly learn something.

Which is why I am much more inclined to give my children and the other people that I work with a tool that isn’t specificially meant for the task at hand. Perhaps I don’t have the right one, but more likely I know that it is the process of figuring out just what the tool can do that will bring about the greatest change.

People say that the iPad isn’t a creation device. By making it into one, I am learning more than if I just accept that limitation.

Some say that blogging is dead. By figuring out how to make my writing alive and valuable to me, I am able to find it’s relevance.

The conventional wisdom is that boomers aren’t interested in a networked workplace (Personal Learning Networks and the like). The plan b is in figuring out where we can go from a place of resistance.

I don’t believe that we are ever done planning for the future, and that includes creating a perpetual plan B. I want to make sure that all of my actions are in the creation of the best possible option for what comes next.

We are not creating the first version of the future. Everything is a revision, a second and third and fourth attempt at getting things right. So long as we keep at it, I know that it will be everything that we need. It may not be what we hoped for, envisioned or prepared for. It will be what we deserve and what we work for. It will be our best plan b. I promise.