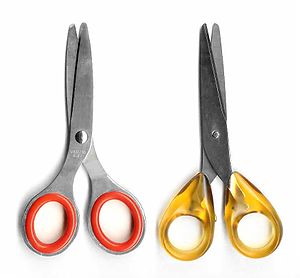 The inconsequential saved my daughter a lot of pain today. It probably saved us a trip to the hospital. It definitely saved us finding out the hard way if electrocution is possible using nothing more than a pair of scissors. Frankly, that is not something I ever care to know, at least not first hand.

Today, my daughter cut the power cord on a lamp that was plugged in.

As I rushed to her to figure out why she and her brother were being so quiet behind the chair, I saw her make the snip and I watched as a spark and a cloud of smoke immediately came off of the metal. She knew something was wrong, that she had really provoked a response from the environment around her. But until she saw my face, she didn’t flip out.

After I started to look her all over for signs of burns or brain damage, she started to wail. I snatched her up and held her as close as I have ever held another human. As I consoled her, I looked at the scissors. They were blackened and a bit had broken off. She had just enough time to cut through the cord without me seeing that it was her intention to do so. She would have been injured if it were not for the rubber handles on her scissors. The purple grips that I found cute when we bought them turned out to be a rather important feature.

I feels it is something they should put on the packaging, actually:

“If your child cuts a power cord clean through, she will not get electrocuted. Guaranteed.”

That, for me, is going to be the key feature on every pair of scissors I buy in the future. I won’t even look at metal only or plastic handle scissors. Those won’t keep my children from this particular tragedy. No. The only scissors for me are the ones within which I can feel their electricity diffusing power. And, as I look at the burns on the metal, where my daughter made her cut, I can feel nothing but grateful that I unwittingly made that choice.

And it is always that way. The feature that seems inconsequential becomes essential.

When camera phones came out, I thought that they were a ripoff. I couldn’t imagine any reason why someone would want a subpar camera in their phone and pay a premium for the privilege. Now, though, they the extension of our brains. They capture what we can’t text. They grab bar codes and do searches. They Evernote the world and do video conferencing. They have probably saved a few lives too, simply by being a witness when everyone else isn’t around.

It is our responsibility to find the things that don’t mean anything at first and then take on life giving qualities. It is up to us to seek out the features that provide hope to desperate circumstances. These are the ones that go unnoticed for years but take on massive importance just as soon as someone figures them out.

I am a feature that is in need of finding too. At some point, I hope to save lives like the rubber handles. I may end up with some scars in the process like the metal blades, but at least I will be of use. I will be essential then, and everyone will know that I have been built this way for a purpose. That I work on what I should day in and day out in the hopes that someone will choose me rather than someone else, someone less prepared for the risky tasks. I’m not looking to be a martyr, but I would step in the way if I knew that someone or some idea I loved was going to be hurt.

I fight to be in the tool drawer for when I am needed. I just hope the people that pick me will be as discerning as we were with our choice of scissors.