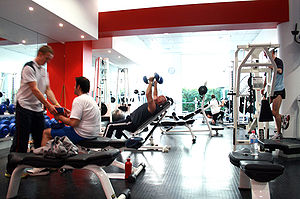 During my first year of college, I decided that I was going to work out every day. And I did. I ate whatever I wanted, but I worked out for at least an hour. I would start off by running on the treadmill or doing the stationary bike and then I moved on to the sit ups. I did about 50 a day for the first few months and then I started adding weights to my chest. This was a hold over from the summer before when I just used my graduation present dictionary.

I would do work on the machines in the fitness center too, but I never felt all that confident on them. I think I always just thought of myself as having more control over my body when I was the only thing that could break.

Throughout that year, I didn’t miss a day. I even found a gym while I was visiting my girlfriend’s family. I was obsessed then with making sure I worked out, much in the way I am obsessed now about writing these questions.

Right in the middle of the year, though, I received a phone call from a good friend of mine. He was worried about my working out so much. He said that my time on the treadmill was going to hurt my knees. He told me that I should take it easier and not worry about it so much. Now, this was coming from someone who didn’t work out at all. It was coming from someone who, while a wonderful friend, had no idea what the workouts were all about.

To him the running on the treadmill was something you did to get into shape. It was something to be avoided, if at all possible. To me, it was the rhythm of my day. It was what was helping to sort things and out them in their place. It was a way of establishing responsibility for something when I really had nothing to take care of. I had nothing tying me to anything else, other than my studies. I worked out because I could rely on it.

And for him to suggest that this thing was going to negatively impact my knees was ludicrous. It was as if he was attacking being healthy and being sane at the same time. I didn’t stand for it, either.

But, people keep telling me to get off of this treadmill too. While they admire my stamina, they keep on asking if I am really able to reflect or write to the depth that I could if I would slow down. They tell me that I am going to get burned out or that I will run out of ideas. I can’t guarantee that either of those things won’t happen, but what I can do is to pound even harder on the keys.

The repetition of writing at this point is much more about fighting of the intense instability that is everywhere else. This is what I can control. And I have continued to add weights to my chest as I go.

This daily habit is breaking me too. I don’t have the option of taking a night off or quitting because my question sucks. I have to follow my idea to its logical end, otherwise I will have wasted a day.

I can feel myself getting stronger, too. I don’t hesitate to state my opinion or couch it within a greater movement. I don’t have to apply everything to a technology or a teaching technique. I can let my posts just stand for themselves, even if no one reads them. I trust myself that given enough time to think and write, I will come up with something that at least I will be interested in reading again someday.

So, don’t tell me I am going to hurt my knees. Come running with me. Don’t say that my torrent of posts in your feed reader is too daunting to catch up. Draw a line in the stand and start there. Don’t say that I am spreading myself too thin. Rip down barriers for me so that I can spread unabated.

If only I could find time for working out now, too.