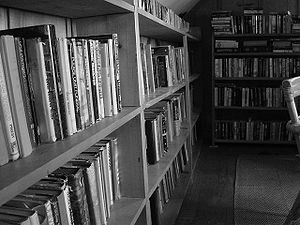 Study hall was where I honed my skills as a bully. And since I was weaker and less socially adept than almost everyone, my bullying was relegated to a single individual, Bryan. Now, I didn’t beat him up or call him names. I just pestered him. In that middle school library, not long after we had taken our seats at the same small round table, I would start talking with him. Truth be told, Bryan was one of my only friends in the Study Hall, so I didn’t have much choice but to talk to him, except that we weren’t supposed to talk. So, I would whisper at him, I suppose. I would ask him questions and tell him things about what was going on in my life, and I expected him to respond. But, he never responded to my satisfaction. He never put forth a full-throated response. So, after a while, I started telling him to use his “real voice” as if the one he was using was fake and dishonest. I kept trying to get him to speak more and more clearly.

Bryan was nothing if not shy, and I thought that perhaps I could get him to snap out of it by simply bothering him enough. I figured if I got in trouble enough for talking and moved around from his table enough for cracking us both up that he would just have to take notice and say something “real.” This didn’t work out so well. He remained silent up until he skipped town a month before High School graduation to go be with someone who did understand his quiet and unassuming attitude toward everything. Not that we were that close by then. He had gotten enough in that study hall to know that being bullied into saying something real isn’t an option.

The bullying hasn’t stopped, though. I still pester people to say things with their “real voices.” I gently nudge people to blog. I pull people into conversations that they weren’t previously a part of in an e-mail thread. I outright call for participation on twitter. When people have been away for a significant length of time from posting or engaging in the community that I believe they are a part of, I call them on it. I ask them where their next podcast is. I continue to call for more writing and creating, even as they are just going about their normal existence.

It has become an even stronger belief that silence isn’t an option online. If you aren’t continually crafting a message, then there is something very wrong with you. And while I live that every day, it is becoming more and more clear that silence should be a choice afforded to all people. It should be okay to simply drop off the radar, if only for a little while. It should be accepted that some people are more shy than others, and it doesn’t mean that they will have less friends on Facebook, it means that they may not be on Facebook at all. It means that their digital footprint might be so light as to be washed away from a single high tide.

We preach that posting and creating is almost a civic duty in today’s society, but what about those people who really are content to speak only when they have to and only speak to those who matter to them? Shouldn’t they have the right to not engage in the public creation of content? Is forcing them to start up a blog or participate in a wiki really such a good idea?

While I do not think that my bullying is why Bryan left Ohio for Florida, I do think that our collective bullying was. I think that everyone is feeling pressure to speak authentically and without reservation about their lives and post status updates every few minutes. With this pressure comes the fact that many people cannot live up to that ideal of transparency. And when they figure out that this pressure doesn’t exist everywhere, they will run to those places that do exert it over everyone. I believe that a social networking backlash is coming incredibly soon, if it hasn’t started already.

This backlash will be all of the kids/people who can’t stomach the empty friendships and connections. It will be the quiet folks who don’t need the constant noise and chatter of a news feed. They will form their own spaces in the real world and they will shut themselves out of everything that has to do with a technology-based relationship. Some may refuse to own a cell phone or be reachable by anything other than meeting in person. They will be silent to all but their own “kind.”

And while I will respect their choices to live away from the pressure of the “What are you doing?” and “Where are you?” questions, I think that society will be missing out on their contributions. Not in the sense that we will miss out on their status updates, but rather that we will miss out on their presence and their gentle pressure back, reassuring us that we don’t have to be posting all of the time. Just as I believe that we need to make our online spaces more hospitable to those who would rather not speak up, they should continue to provide us with the value of choosing our words carefully. Silence should be an option, both in study hall and on the internet.