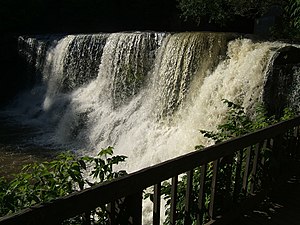 The Chagrin river never froze over completely. At least, not in my memory anyway. It was always halfway frozen in the winter, allowing for a few ducks to sit on the frigid water as it took them closer and closer to the falls beneath the Popcorn Shop in my hometown. Halfway out onto the river, the ice was thick enough to stand on. Or so I thought.

Two of my closest friends decided to venture out onto the river as far as they would dare. I followed with a lot of apprehension, but eventually I was able to join them a few feet away from the bank. At first they were only interested in stomping around in circles and hearing the faint cracking underfoot. Then as they saw the ice hold more and more of their weight, they began to jump . Up and down they went and I did my best to be uninterested. I knew what was coming next. I knew that it was only hubris that was standing between us and the freezing cold water. But I couldn’t help from joining in. I knew that at any moment we would become enormous popsicles, but right then we were dry and warming up from all of our jumping.

I can’t believe it took us more than 5 minutes to break through, but we spent the better part of half an hour trying to prove that we were as dumb as the people watching from the park were beginning to suspect. And as we fell through the ice, I remember thinking that we deserved it. We had tempted the gods of the river, and we were right to freeze to death.

Luckily, one of my friends lived just a few blocks away. So, we ran as fast as we could, the water freezing against our skin. Our clothes were stiff by the time we made it. As we dried off with some of the warmest and most comforting towels I have ever known, I knew that no amount of explaining would ever allow others to see why we had to jump on the ice together and feel it crack under our weight. I knew that it wouldn’t be possible for my parents or my friend’s parents to see why jumping was our only chance to make sure that we were alive in all of the ways we wanted to be.

And I put it to you that I still cannot explain it. I still cannot decipher our total lack of understanding for what it was we were attempting. What I can say is this: Every risk I have ever taken is some version of that day.

Every risk, so long as it is worthy of consideration, but be two things: a collective act and have the possibility of catastrophe. Solitary risk isn’t of interest to me. It doesn’t hold my imagination at all. Without friends around to watch me fail, there is little hope that I will ever be able to learn or have any kind of humor about that failure in the future. I also believe in total catastrophe as a kind of performance art. I often tell my wife that taking two trips from the car to the refrigerator to put away the produce is much more fulfilling than taking one. I say this because there is a much higher likelihood that I will stumble my way into something interesting if I can take my time with each bag. I am just clumsy enough that the practice of taking two trips doubles the possibility of me falling headlong into the refrigerator, or better yet, a good idea.

I am not interested in advocating for jumping on thin ice, however. What I am advocating for is a kind of free will that doesn’t disallow jumping on thin ice because it is a monumentally bad idea in the eyes of pretty much everyone. I am recommending that we all, from time to time, embark on some hideously bad ideas in the hopes that we can gain insight. Oh, and we should write about them and share stories, too. That way, anything so absurd as to cause each of us to thank our lucky stars that we weren’t involved will be the push we need to go out and try something truly insane, and perhaps spectacular.