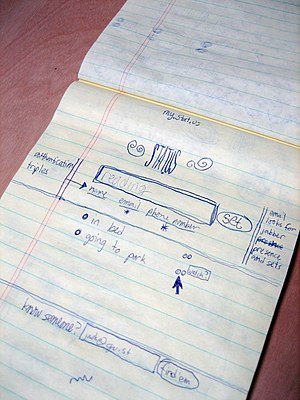 I was in the boy scouts for a total of a few months. It wasn’t that I didn’t like the things that happened there, I’m just not sure I ever figured out the idea of someone else giving you a badge when you have done something they deem worthy. Even from a very young age, I always wanted to be able to award myself for great accomplishments.

I was drawn to indie music for just such a reason. Every concert I went to, I purchased a patch or a button and I affixed it to my jacket as an award for being there. I would sew or tape or safety pin all of the things that meant something to me, and it felt as though there was nothing bigger that needed to present me with more.

I was always fascinated with wearing your interests and passions on your sleeve. I did this for many years, at least until it became inappropriate. I wore patches from those that represented who I was. When those things went away, I feel as though I lost a piece of my identity that I have never really been able to regain.

I think that those people I follow on Twitter and those I friend of facebook probably represent the best patches I could muster now. They are there for everyone to see, but they are so virtual that everyone else just looks at me as another young father in the local Safeway. There is nothing for people to react to or take interest in beyond my solid colored shirts and grey pants.

Others are trying to bring back the patches on foursquare and other social media games. And yet, these are ridiculous. There is nothing tangible about the swarm badge or being a mayor. There may be some connection being established as well as some bragging rights, but there isn’t any way to affix these badges in a unique way to represent who you are. There is no equivalent of safety pinning a Link 80 patch to a thrift store t-shirt. And there won’t be until we make the virtual fully tactile.

I envision a day when the places we have been and the people we know are no longer just in the online world. We will no longer have to write our Twitter handles on our name tags because people will know us when they see us by who we claim to be. This will happen when we augment our reality and tag ourselves, but it will also happen when we stop the absurdity of the and/or of technology.

Right now, you have the iPhone or you don’t. You either are on Twitter or you aren’t. You either make movies and post pictures or you don’t. In the near future those things won’t matter. Everyone will have a smart phone of some kind. Everyone will be on a social network. Everyone will be a photographer and movie maker. When this happens, the culture will not be about either/or. It will be about including these things in all daily life. We won’t have to wear “drastically digital” clothing because it won’t be important. Our bracelets that don’t do anything more than hang on our wrists will be about our digital lives as much as our analog existence. When everything online is the backdrop for what we do, we will once again be able to buy patches and own who we are.

While this may sound utopian (or dystopian to some). I look forward to the day when we do not begrudge physical objects because they aren’t high tech enough and we don’t discriminate against virtual objects because they aren’t real. At that point I think I will regain some of my identity that was lost. Then I will be able to wear my patches with pride.