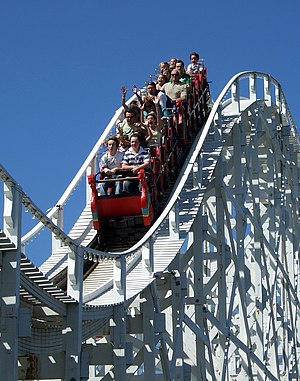 Carnivals were a common occurrence during my childhood. The Blossom time parade and carnival over memorial day was perhaps the most memorable. Every year it meant something else. For a while, it meant games and prizes. For one year (before I realized that roller coasters made me feel quite ill), it meant rides. For a couple of years it meant finding a date to go and hold hands while walking through the grounds. And later on, it meant singing the Battle Hymm of the Republic with my choir at the cemetary after the parade was all over. This carnival changed many times for me, but all of the elements stayed the same. It never got any bigger or smaller. It was just a fixture of a single weekend every year.

Less of a fixture were the other carnivals in the towns surrounding Chagrin Falls. I would sometimes venture to the Holloween carnival in West Geauga or the 4th of July festivities out by one of the local lakes. These events never were set in my mind as having a single purpose for any given year. They were always about something other than what was completely comfortable for me. The haunted houses were never my idea, nor were the 4H style animal areas of many of these fairs.

The most uncomfortable situation at one of these “other events” was when a friend of mine wanted to go up to one of the religious tables and have folks give her tracts and preach directly at her. I waited a few paces off while the man attempted to save her all over again. When he was finished with his prepared speech and had handed over at least 5 different pamphlets, she we left the oversized barn. My friend told me that it was like going to summer camp, church, and a retreat all rolled into 10 minutes. She was transformed, at least for a few minutes, by the extreme position and unbridled passion that the man exhibited. It was then that I realized the power of fanaticism.

While I relied on my standard issue carnival every year, it was only at this significantly different event that my friend could be changed. It wasn’t that she went in looking to be changed, but afterwards she felt as though there wasn’t any other purpose that mattered. That carnival would now always be about the table in the barn with the man holding out his tracts and spitting his absolute truth, for both of us. I couldn’t make it be about something else because of the way my friend looked and how uncomfortable it made me feel.

And perhaps, that is why the events that cause us to feel transformed are not the ones that we would want to look back fondly about as if they were the backdrop for all that we are. They are not the events that stayed with us, year in and year out. They are not the moments that we can make into whatever we want because there was something that reached out and grabbed our attention and bent it toward a single purpose. Sometimes these transformations are good, and sometimes they are hideously bad.

I guess that is why I don’t think that going to the same conference or event every year will bring about real change. I don’t believe that people are ever going to create something divergent if they don’t seek out opportunities to find fanatics or be fanatics without the need to temper their opinions for a wider audience. Sometimes, we need a specific purpose without having to explain how it relates to all of the other work that we are doing. Sometimes we need to get caught up in the moment without worrying about how it looks or the implications of what it might mean for the future. Sometimes, we need to let ourselves be changed.

So, what are those divergent events? Who are those people that will leave me feeling so energized by their obsessions that I can’t possibly ignore them? More recently I have seen the gradual expansion of the same ideas. I have noticed the evolution of what has come before. I wan’t someone to make me feel uncomfortable, to approach me with tract in hand and challenge me to look away.

Right now there is too much backdrop. There is too much yearly festival and not enough fanatics. The soap boxes have been shaved down to almost nothings so that everyone just looks like a carnival employee trying to get you to try the latest game or ride.

I’m not looking for pure excitement. Instead, what I am after is simply something different enough to change what I think. I’m tired of what I think. I’m tired of following these ideas to their logical conclusion. If they really matter, they will be sharpened by a fanatical change. If they don’t matter, they will go away and I will start working toward something else.

The benefit of an extreme position is that we remember them. Always.