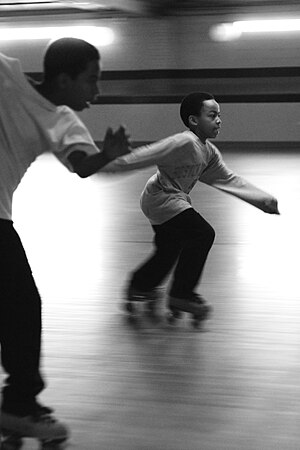 For my tenth birthday party, I received a set of black roller-skates. Not rollerblades or inline roller hockey skates, but rather old school roller-skates with different colored neon wheels. I was cool.

I rode my skates around the local roller rink as much as I possibly could, which actually meant as much as my mother would take me. I skated to the likes of the ghostbuster’s theme song, YMCA, and Eye of the Tiger. I loved the way that the four wheels supported me and the way the black leather seemed to clash with everyone’s brown rentals.

I had another 2 or 3 birthday parties in those skates before I had to give them up because they were just too small for my feet. For those few years, though, I’m not sure that there was something as freeing or as differentiating as putting on those two skates that no one else had (and most likely, no one else wanted).

I’m not sure how I feel about the roller derby resurgence as a cultural icon of our times, but I do know this: I didn’t have roller skating role models.

There was no Michael Jordan of roller skates. There was no Roger Clemens of the rink. In fact, I didn’t see much of anyone who was proficient at roller skating who was over the age of 18. About the best I could do were the kids that worked there or who stayed every day just for the races that were held at 1:00 or so. Most of them had inline skates, though. Even then, I knew what was going to be the dominant force in wheel-based root wear (minus the heelie which I really never saw coming). So, why did I choose to spend so much time and energy on a dying art? And, how did I learn to skate without the aid of role models that seem to be necessary to every other discipline?

But, perhaps it was the lack or role models that intrigued me. Maybe it was the fact that there wasn’t really anyone else who was stating the way it had to be that made me want to do it. After all, if I wasn’t any good, I would still be one of the world’s best, right?

If that was the case then perhaps we should continue to look Into the realm of obsolete achievements for trying to find others who were like me, starving to be good at something that no one else was.

Perhaps we can go and find those things that have formerly shared the limelight and now have fallen out of favor. Or, we could see about roles without models as something to be sought after, something to be created by authentic individuals.

Here are things that I think fit into this category:

I realize that all of these things could have a mentor, and have some pretty decent examples of what good and creative works look like, but for the most part any one of them can be a doorway into a world that very few people are traveling within. Anyone could come to these disciplines without a role model, and simply out of their wish to do something different.

I think that is what makes me most excited about starting up or about creating new learning spaces. Although there are plenty of good examples, there isn’t a role model for either that had the same sets of constraints or experiences. And much of what I do feels like I am trying to get people excited about the roller-skate again. They see reforms, new technology, or interesting collaborative tools as something that they have already tried. They are already to move on to the next generation of skate that seems to really have everything sorted out and comes with a huge amount of bells and whistles, but breaks down in a few months and must be replaced.

You see, on a 4 wheeled roller-skate, every single part can be replaced or modified. Because there are so few variables, the ones that exist are essential and can be toyed with until the perfect fit is achieved.

That is what I want: a perfect tool for the job, versatile and manipulatable. I want to be the best at wielding that tool, and know that others can’t just copy my technique because they haven’t trained their muscles to move like mine. Their technique is weak, and they are out of practice. In other words, I want to race them around the rink with everyone watching, and I want to win.